A notary public is a public official whose powers and duties are defined by statute.  In Hardesty v. Citifinancial, Inc. (In re Roberts), 402 B.R. 808 (Bankr. S.D. Ohio 2009), the court held that a notary public is a public officer, and the generally accepted rule is that, in the absence of evidence to the contrary, public officers will be presumed to have properly performed their duties and not to have acted illegally but regularly and in a lawful manner.

Generally, a notary public is a public servant with statewide jurisdiction who is authorized to take acknowledgments, protest instruments permitted by law to be protested (primarily negotiable instruments and bills and notes), administer oaths, take depositions, and certify copies of documents not recordable in the public records.

In general, state governors appoint the notaries public and sometimes with the consent of a state legislative body or representative.  Each Notary Public takes an official oath of office to faithfully perform the duties of the office, and to insure such performance, a notary public is required to post a specific bond with the Secretary of State.  The powers conferred by statute upon a notary public are judicial, or at least quasi-judicial. Statutes provide and define the procedure and powers of the notaries public.  Statutes also regulate the profession by determining the place where notarial acts can be executed, outlining qualifications of prospective applicants, and requiring a bond conditioned upon the faithful performance of a notary’s duties.

Generally, the Constitution prohibits a person from dual office holding or holding two offices of honor or profit at the same time.  Dual office-holding is generally defined as the practice of holding two elected offices at the same time at the state or local levels, paid or unpaid.  Where the office of a notary is an office of profit within the meaning of a statute, the holder of any other public office of profit vacates that office by accepting appointment as a notary public.

In Moser v. Board of County Comm’rs, 235 Md. 279 (Md. 1964), the court held that an office of profit has been variously described as one that has been created by law and casts upon the incumbent duties which are continuing in nature and not occasional; as one in which the incumbent performs an important public duty; as one which calls for the exercise of some portion of the sovereign power of Maryland; as one having a definite term for which a commission is issued, an official bond is required and an oath is prescribed; and as one of dignity and importance.

Pursuant to 22 USCS § 4215, whenever application is made to any consular officer, within the limits of his/her consulate, every consular officer of the United States is required to administer to or take from any person any oath, affirmation, affidavit, or deposition, and to perform any other notarial act which any notary public is required or authorized by law to do within the United States; and for every such notarial act performed he shall charge in each instance the appropriate fee prescribed by the President under section seventeen hundred and forty-five, Revised Statutes.

In the same manner, 22 USCS § 4221 also provides that every secretary of embassy or legation and consular officer is authorized, whenever he is required or deems it necessary or proper so to do, at the post, port, place, or within the limits of his embassy, legation, or consulate, to administer to or take from any person an oath, affirmation, affidavit, or deposition, and to perform any notarial act which any notary public is required or authorized by law to do within the United States.

All affidavits, acknowledgments, and other notarial acts, performed by notaries public within three months after the expiration of the time for which they have been commissioned to act, shall be valid to all intents and purposes as if they were performed during the time for which they were commissioned to act.  A notary public who has been duly commissioned and has taken an oath, and at diverse times has filed bonds, and who has acted for 25 years, remains a notary de facto, even though he has failed to file a copy of his oath with the secretary of state and the clerk of the court, as required by law, and has not renewed his bond in time to keep his commission alive.

If a notary public is a party to an instrument, s/he will not be able to act as notary public however small or nominal the interest may be.  Usually, notaries public are appointed to act within a certain county which is the limit of their jurisdiction, but some states hold that a notary duly commissioned in a county of the state has jurisdiction to act in any county of such state.  A notary is required to indicate the political subdivision and the county in which his/her office is maintained.

Usually, the Secretary of the State is authorized to appoint and commission, for a specific term, as many as notaries public as required in the interest of the public, and whose jurisdiction is co-extensive with the boundaries of the state.  In some jurisdictions, notaries public may be appointed or commissioned in numbers considered to be necessary or convenient.

However, in view of the many duties and services rendered by notaries, a statute which provides that the governor “may” appoint and commission notaries public for the several counties of the state in such number as he deems necessary for the public convenience.

A Notary Public is personally liable for negligence or fraud in the performance of the duties of the office.  However, a bond does not protect the Notary Public from personal liability for the full extent of damages caused by a breach of official duty.  In addition to civil liability, Notaries Public may be subject to criminal prosecution and the revocation or suspension of their notary public commission by the Secretary of State’s office.

In Villanueva v. Brown, 103 F.3d 1128 (3d Cir. N.J. 1997), the court held that a notary has a duty to refrain from acts or omissions which constitute negligence.  That is a duty which he owes not only to persons with whom he has privity but also to any member of the public who, in reasonable contemplation, might rely on the officer’s certification.  With respect to the identities of signers, the law requires nothing more of the notary than the use of reasonable care to his satisfaction in his own conscience that the signers are the persons they purport to be. 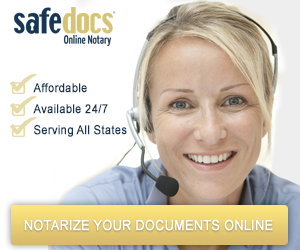